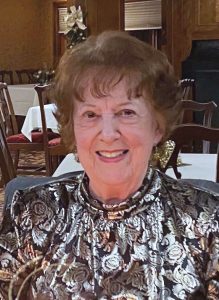 This year’s honorary chair has led a very busy life both personally and professionally. Marilyn Maytum was born in Pittsburgh, Pa. in 1934. In 1952, she began working at Bell Telephone of Pa. as a service representative, which was her first telephone company experience. In 1954, she entered Allegheny College where she met her best friend, Bob. In 1957, she graduated from Allegheny and went to work in the legal department at U.S. Steel headquarters in Pittsburgh. Then in 1958, she married Bob and began her life in Fredonia, NY.

Marilyn first worked in the metallurgical lab at Allegheny Ludlum Steel in Dunkirk until 1962 when their oldest son Kurt was born. Their daughter Laurie joined the family in 1964 and son Mark in 1967. She was a city girl that quickly loved life in small town Fredonia. Over the years, she has been involved in many volunteer boards and organizations. She has many happy memories of her 10 years as a Girl Scout leader. This included many camping trips and chaperoning a week trip to Bermuda. Perhaps the most rewarding and at the same time challenging positions were her 15 years on the Fredonia School Board of Education and the Lake Shore Hospital Board, where she served as personnel chairman. While on the school board, she chaperoned 3 student exchange trips to Bomberg, Germany. The students were those who had 2 and 3 years of German.

As her children grew older, she became involved in the family business, known then as the D&F Telephone Co. Her first job was to help set up and sell the long-distance service called Comantel. Their offices at that time were located at 44 Temple Street on the first floor on the right side. The left side was empty and before long, she started selling hand made gift items on consignment. This grew into her gift shop later known as Tower Gifts.

It was not all work and no play. First, with her sister and then with her daughter Laurie, she was privileged to travel to more than 60 countries on 5 continents. Also, she very much enjoyed playing bridge, which she learned in college, but today she proudly says that her game is Mahjong.

Through the years, there have been many changes in the telephone industry. From the beginning with great great-grandfather Arthur Maytum and continuing through Gertrude, Bob Sr., Bob Jr. and sons Kurt and Mark, the Maytum family has strived to do the very best for their community. She credits the dedication of their loyal employees who have helped to make all of this possible. As Bob, Sr. always said, “We are all family.” One hundred twenty-three years later and now a 6th generation grandson Kristopher is carrying on the family commitment.

Truly a record for which all of the “family” should be proud!